Mysore Dasara is a Royal Festival Celebrating victory of Truth over Evil. Legend has it that the Goddess Chamundeeswari or Durga slew the demon Mahishasuran on Vijayadashami day.

Dasara is a 10-day festival in the region culminating on Vijayadashami or tenth day. The day marks the successful conclusion of the preceding nine days. Vijayadashami is also a day of victory of the King and his subjects'be it in a battle or day-to-day governance. The preceding nine days of Navarathri have celebrations starting only after six days. The sixth day is in honour of goddess Saraswathi. Eight day is dedicated to Durga and Ninth day is for Lakshmi'goddess of wealth. On tenth day a grand spectacular Procession is held which starts from Mysore Palace and ends in Bannimantap.

In Karnataka'Dasara is observed as State festival - Nadahabba'because of the celebration of the festival is steered by the Royal Family of Mysore. The royal family of Mysore performs special pooja on the occasion of Dasara. During Dasara'the entire City is gaily decorated and illuminated. The Palace and other important buildings are illuminated. Cultural programmes by famous artists are arranged in the Palace along with Sports'Wrestling'Poet's meet'Food Festival'Film Festival witnessed by a large number of people. Dasara Exhibition is arranged in the Doddakere Maidana'by the Karnataka Exhibition Authority'where the public and private sector industries'leading business establishments'Government departments put up their stalls to promote industrial and corporate business for months.

Mysore is an enthralling destination for travelers'especially during Dasara. The illuminated Mysore Palace during the Dasara celebrations draws tourists from all over the world. Nearly Rs. 1 crore every year is spent towards maintenance of its illumination alone and more than 25,000 bulbs are replaced every year just before the Dasara festivities.The elephants for the Dasara processions are also undergoing training for the grand day. 12 Dasara jumbos will march on the procession route from Mysore Palace to Bannimantap twice a day. 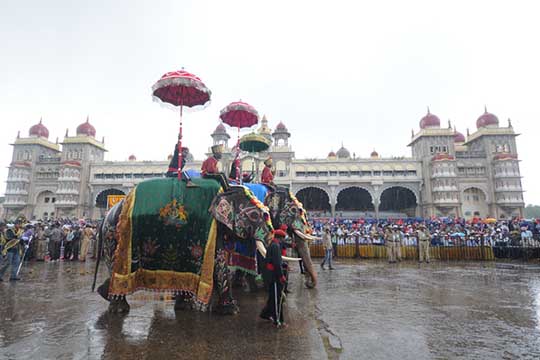