Day 01: Arrival in Delhi
Upon your arrival at the Delhi airport'meet our tour representative. He will help you with a guided transfer to one of our listed hotels. Relax for a while and thereafter'get ready to explore some of the attractions of the capital of India.

Your half-day trip will include best places to visit in Old Delhi like Jama Masjid – one of the largest mosques in India. Red Fort – Built up of red sandstone'the iconic landmark is titled as a UNESCO World Heritage Site. Chandani Chowk – a shoppers' paradise'the place is a treasure trove of everything you can dream of.

Day 02: Delhi Sightseeing – Jaipur
There is nothing better than a guided tour to Delhi to start your day. The excursion begins with paying a visit to the Lakshmi Narayan Mandir'also known as the Birla Mandir. Offer your prayers and witness the grandeur of the temple.

Thereafter'proceed to sightsee other places like India Gate – a war memorial to commemorate the martyrs of the World War I and the Gandhi Memorial. Drive past the Parliament House and other embassies. Humayun's Tomb and the Qutub Minar are the two must-visit places included on your itinerary. Once done with the excursion'hit the road to Jaipur. After reaching'complete the check - in formalities at the hotel.

Day 03: Jaipur Sightseeing
Day 3 of the Golden Triangle tour with Varanasi promises fun-filled holidays in Jaipur by taking you to the Amber Fort. Enjoy an elephant ride and discover the fort till your heart's content. This is followed by navigating the other iconic sites of the 'Pink City''like Hawa Mahal and Jantar Mantar – a collection of 19 astronomical instruments. Boasting of a remarkable architecture'the Hawa Mahal'also known as 'Palace of Winds' is adorned with 953 windows.

Roam in the bustling markets and don't forget buy souvenirs that will remind you of your amazing family holidays in India.

Day 04: Jaipur – Fatehpur Sikri - Agra (245 km)
Savor scrumptious breakfast and head towards Agra. Your road journey to the 'City of Taj' also includes a halt en route at the Fatehpur Sikri. Established by Akbar as the capital of the Mughal Empire'the city is a UNESCO World Heritage Site. A number of historic monuments adorn the ancient town and accounts for an intriguing expedition.

Resume your journey to Agra after witnessing all the monuments. Once you reach'you will be escorted to the pre-decided hotel. Check-in and enjoy the rest of the day leisurely.

Day 05: Agra Sightseeing - Varanasi (by Train)
Wake up early in the morning and get transferred to the Taj Mahal to admire its sublime beauty during the sunrise. (Taj Mahal remains closed on Friday). Post this'get ready to visit the Agra Fort and tomb of Itimad-Ud-Daulah.

The Agra Fort is an ancient fort which has served as the main residence of the emperors of the Mughal Dynasty until 1638. Also known as the Baby Taj'the Tomb of Itimad-Ud-Daulah mirrors a jewel box and presents a sight to behold. The evening is reserved to catch a train to Varanasi.

Day 06: Arrival in Varanasi
Receive a warm welcome from our tour representative who will help you with a comfortable transfer to the hotel. Check - in and unwind yourself. Subsequently'proceed for an excursion to Sarnath. Nestled near the confluence of River Ganga and Varuna'Sarnath is one of the four holy Buddhist sites.

A half day trip to Varanasi is scheduled for rest of the day. The destinations which will be covered are Alamgir Mosque or Beni Madhav Ka Darera'Dashashwamedh Ghat and the Bharat Mata Temple. Built in the 17th-century by Aurangzeb'the mosque portrays a perfect blend of the Hindu and Islamic architecture. Dashashwamedh Ghat enjoys the worldwide repute for hosting the evening Ganga Aarti. Rather than housing statues of Gods and Goddesses'the Bharat Mata Temple is home to a huge map of India carved in marble.

Day 07: Varanasi - Delhi (By Flight) – Departure
The last day of the tour begins with a morning boat ride on river Ganga. Post satiating your hunger with an appetizing breakfast'head towards the airport to catch your flight to Delhi. After reaching the airport'catch your homebound flight. 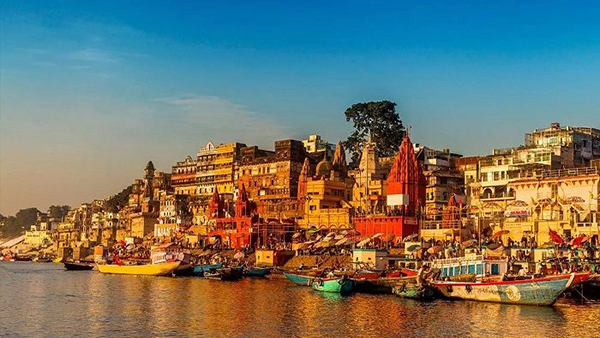